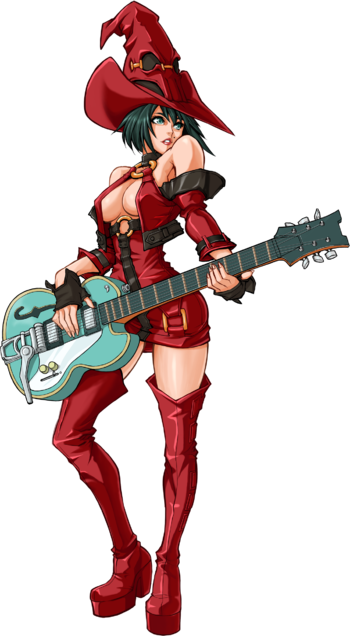 I-no is a unique and extremely effective rushdown pixie character, but takes great risks to do so without being covered by a note, scoring a knockdown, or having safe(anti-reversal) setups. I-no should be played with two goals in mind: 1) score a knockdown or make an opponent block a note during neutral, and 2) continually mix up the opponent in the corner utilizing her superior tension gain and unrivaled offensive potential during okizeme. When I-no is pressuring out of an okizeme situation, or even a simple blockstring; she can be almost unblockable up close. That being said, although her strengths are firmly rooted in offensive capabilities, she lacks in defensive options to get her opponent off of her without spending meter or bursting, and her unique movement options may sometimes be detrimental to her regarding certain matchups.

At round start, I-no will often have to guess the opponents move and choose a way to punish (TK dive, STBT, HCL), or alternatively IAD backwards with j.hs (very safe) and begin zoning with a note or fishing for HCL for a safer way in. The following are techniques to close the distance, extend combos and mix up the opponent.

What makes I-no immediately stand out from the rest of the cast is her movement options. I-no’s ground dash, instead of a run, hop, or glide; is an aerial hover dash which increases in height the longer the dash is performed. This enables her to leave the ground and immediately perform an overhead attack on opponent, or dash briefly and land to score a low attack. She also has the ability to airdash out of her ground hover dash, which is extremely useful for extending her mixup options as well as pushing the opponent back towards the corner before they have even risen from a knockdown.

However be warned, when it comes to execution I-no is definitely not for the dexterity challenged player. Many of her combos, especially those in midscreen, are notoriously among the hardest in the game. To give an example of one of her bread and butter combos, it would require utilizing the FRC point on her either jump installed or tiger knee’d Horizontal Chemical Love attack, and performing a dash split technique to instant air dash out of the cancelled move within 4-6 frames (depending on whether it was jump installed or tiger knee’d respectively), in order to continue the combo. Her Chemical Love attack, which has the unprecedented feature of being a special move with a super move motion; being performed by inputting 6332146+S for the horizontal version, or with the slash button for a vertical oriented version is a staple in her combo set and leads to her most damaging combo options, and its use via neutral as well as its FRC point must be mastered in order to be even somewhat competent with her. The notation for such a basic combo for her would be 6P > 5H > 632147(8)(9)6+K > [6 > K+S+H (FRC) > 6 (air dash 2nd input)] all within 4-6 frames > iad S > 632146+S.

However when mastered, an expert I-no can leave even the best opponent feeling helpless, and has one of the highest comeback potential out of the entire cast.

When breaking down I-no, she has the same mixup everyone in the game has: high/low/throw. What makes her better at this than most characters (save Millia) is her hover dash, that lets her access near-instant overheads vs. the entire cast. Even so, when fighting players familiar with her, her mix-up becomes very stale unless you adjust it. A good basic example for instance, is her hover dash->j.k. After getting hit by this a few times, players will start to react to the hover dash and block. To stop this, you can do hover dash->land->2k. This will catch players still stand guarding, but is still reactable. A great way to hide the fall j.k is to hoverdash->while still at a fairly low height->j.hs. The j.hs has a slow startup and causes I-no to fall out of her hoverdash, ending it faster than just letting go of the dash. Use this to ground yourself faster, and then 2k. The same technique lets you land instantly into walk forward throw.

From Guilty Gear Slash onwards, I-no gained the ability to air dash out of her hover dash. On a pad, the easiest motion is simply 66, 66. Using a joystick, use 66, 9 (release to neutral 5), 6 (can also be written as 66956). Having this technique at your hands means that I-no gained access to a slew of new mixups!!! When I-no dashes over a downed opponent, she can dash backwards at the right moment to go back over the opponent and combo, or dash later and cross the opponent up! Also, using this double dash can lead to a fast falling vertical chemical love...

After successfully double dashing (see above), immediately perform VCL (632146s). Because the end motion to double dash is also 6, simply using that and doing 32146s will work fine. Depending on your timing, you will see I-no fall immediately to the ground after the VCL or recover slowly. Doing fast fall VCL has several useful applications. You can do so after knocking an opponent down to secure their postion during okizeme, so they do not try to backdash, jump out, or reversal attack. Double dashing in with fast fall VCL puts the opponent in a guessing position as to whether your next move will be high/low/throw. If the opponent has a shoryuken (reversal uppercut or super) of sorts, doing this fast fall VCL with an frc will guarantee your safety! Also with the frc, you can perform an instant high-low mixup, known incorrectly as a "fuzzy guard" mixup. In Guilty Gear, any attack that forces a high block will keep the opponent in a high block state for a certain number of frames. During those frames, if one can land or almost land and can go back into an air attack, it will hit the opponent even if they crouch underneath it, for the game will register them with the standing hitbox from the previous high attack. The window to do this is not so big. So when I-no does fast fall VCL (and the opponent blocks high), VCL FRC land into immediate j.k will hit a crouching opponent. J.k will then combo to k/s dive (s dive preferable for combos) and let you start making some damage. Sorry for the complicated explanation!!

By adding a dash to the end of a chemical love (VCL or HCL, doesn't matter which), I-no can gain access to a new type of CL that contains the momentum of a dash!! This can be performed by inputting 6321466k/s. It is not as easy as it sounds and may be easier on the 1p or 2p side, depending on the player. This is not a commonly used technique, but can catch the opponent off guard, and allow access to new and sometimes tensionless combos. Not necessary but can be amazingly effective if applied correctly. Also not a bad round starter at times, as VCL momentum will go over any low pokes and score a knockdown, and HCL momentum will destroy backdashes and retreating opponents.

This is simply doing J.d into a faultless defense, thus retaining the momentum of j.d while canceling the attack. Do j.d, immediate FD (different people have different methods. Find the two buttons most comfortable for you to FD from after hitting j.d). The speed at which this has to be done is quite fast, but not so fast that the j.d doesn't happen. Doing this fast and incorrectly will also cause you to burst, but when done properly, this technique is very doable even when retaining your burst. Don't listen to people who say you have to burst first to do this!!
Why is this useful? Throughout GGXX revisions, I-no has gotten many new tools to mix-up opponents, but this mix-up has been around as long as she has and is among her most confusing tricks. J.d while jumping has a certain momentum that moves I-no forward. If FD cancelled quickly, especially after super jumping, I-no will actually jump over the opponent. Doing so will enable I-no access to a quick crossover technique that is hard to react to. Another use can be seen in the following string. Hover dash (HD), j.s j.d. Normally this string is used to hit those that would block low after j.s, in hopes of guarding 2.k. However the block string can be further modified into HD, j.s j.d FDC cancel, j.s (again)/land, 2.k/land throw. This allows you to be less predictable, which is key to being a good I-no player!! Great examples of this include Attsun's #R SBO performance! ---