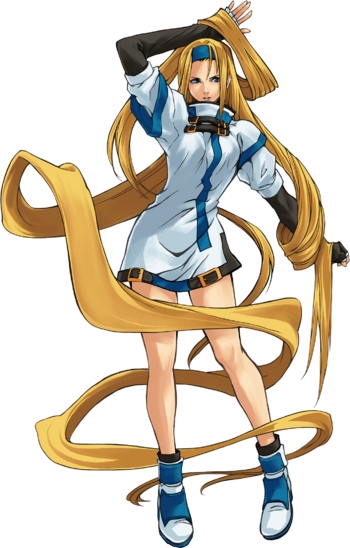 Millia is a very versatile character with arguably one of the best okizeme and mixups in the game with her tandem top and secret garden mixups. She is the 2nd fastest character in the game below chipp except with 2 airdashes and turbofall which allows her to alter her trajectory in the air. These options also make it difficult for the opponent to anti-air her. On top of that, she also has silent force which makes it difficult for opponents to anti-air her or approach her. This projectile is what helps her get in and start her oppressive rushdown and keeps the opponent guessing in neutral.

-2nd fastest character in the game.

-Silent force is a very versatile projectile to help her rushdown and get in.

-No reliable reversal to get out of pressure.

-can't confirm into knockdown from poking at max range.

Your goal is to fish for a hit and convert that into a knockdown and plant H Tandem Top/Pretty Maze to run your okizeme. The movement options you have with 2 air dashes lets you maneuver around the air freely along with 2 jumps and an air dash. Your dash also gives a low-profile letting you avoid some character's moves such as Johnny's Mid Mist Finer. Silent force is your best friend when approaching in the air. With Silent Force in hand, the opponent has to keep in mind that you have it, and they cannot anti-air you for free. Once you are able to score a hit into knockdown, throw out H Tandem Top/Pretty Maze and do a high/low of choice. If they guess wrong, you can set up another situation.

Air movement options you have:

You have Silent Force to approach in the air as mentioned above. This is your key to approaching and getting in. You also want to use your movement options and j.236k to bait your opponent out. When approaching from ground, you have your low-profile dash. 2k, f.S, 2d are your main ground normals to use. Space with the tip of 2d to get your knockdown. Secret Garden can also assist you in covering your rushdown but keep in mind where you are to because you will get punished if you are too close to the opponent. Characters such as Slayer can get a free punish with Dead on Time and Big Bang Upper which can kill you so be careful.

IAD falling airdash j.S: After the first IAD do an airdash close to the ground and press j.S

2k 5k- Standard string, with 5k special jump cancelable, you can IAD over your opponent, tk badmoon, or gatling into 6k. You can also cancel into lust shaker for a frame trap.

2k 5k 2s 5p- Reverse gatling string. Dash up pressure or throw if the opponent respects this. If not, do 2d to catch them sweeping. 6h in the corner to catch jumpouts.

Millia has no reliable reversal out, so you need to rely on Instant Blocking and your Dead Angle. Your throw can help from time to time for it's range. You can also throw out Pretty Maze too if the opponent is charging recklessly. These are not the best options to depend on, so use them sparingly.

Standard ground confirm into knockdown. Starts up your okizeme midscreen.

2H j.K j.S j.H airdash j.D airdash j.H/j.D j.214S land 6H Johnny variant but works on everyone. Delay the j.D a bit so that you are below the opponent.

Works from Anti-Air 6P confirms. Also for maximizing off a successful okizeme from 236H/D. You can omit the 6P from launch from 236H/D hit. All of these work on everyone but Johnny.

Most damaging combo you have off an Anti-Air/236H/D confirm. Timing is also character specific like the above relaunch.

Easier than the above but does a bit less damage.

Easiest confirm out of the 3. Jump back so that you have room to airdash and link the j.K j.D. Delay the first airdash slightly after the first j.D.