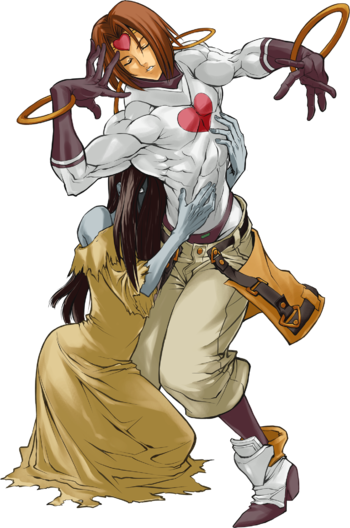 Zappa is one of the most unique characters among Guilty Gear's strange cast, possessed by a myriad of spirits that he utilizes to fight.

Each of Zappa's summons gives him a different playstyle and set of tools to work with, from zoning, to spacing, to rushdown. Zappa's general strategy is to get a summon, play based on that summon's style and gain orbs. Once Zappa gains 8 orbs, he can summon Raoh, inflicting lethal levels of damage for about 15 seconds! Zappa players will have to learn the ins and outs of each of his playstyles resulting in Zappa having five times as many matchups as normal characters.

To do: Check the move names, commands, WARNING: All Ghost notes are guesses and have not been checked, and fill in errata.