I-No is a unique all-range character with powerful options from most places on screen and oppressive offense that utilizes her hoverdash for a very strong high/low/throw game.

Instead of a standard run, I-No has a unique “hoverdash” that puts her into the air, giving her near-immediate access to all her aerial attacks at a moment’s notice. This, along with her frame traps, pressure resets, and a high damage command grab super, makes I-No very difficult to block when she gets up close. To get there she possesses a suite of powerful neutral tools, most notable among them being Antidepressant Scale (note), a projectile that can be controlled vertically and gains hits as it travels across the screen.

However despite her strengths, neutral is probably the hardest thing to learn as I-No. Her hoverdash makes approaching directly difficult, meaning that depending on the situation and matchup she can end up zoning, trying to play footsies, or using her divekicks and Stroke the Big Tree to gamble on maneuvering around the opponent’s attacks. She also suffers on defense, lacking a meterless reversal or particularly fast buttons, so she needs to have a solid understanding of the universal defensive mechanics to get out of pressure. Her below average defense and guts make this even more important.

In the end though, no matter how far behind they are, all it can take is one knockdown for an I-No player to steal momentum and carry it all the way to victory. 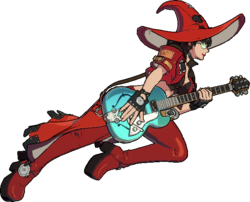 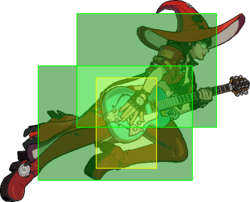 The nature of I-No's dash affects every part of her gameplay. In neutral, it makes advancing much tougher for her than characters with regular runs, especially with Strive's universal dash blocking. On offense, it gives her access to quick overheads from any neutral state, while making pressure resets and throws more difficult. On defense, it prevents her from simply running under certain jump-ins. Even in punishes, being unable to dash for only a couple frames can make them tricky.

Don't hoverdash willy-nilly. Keep in mind its high profile, and make them scared with Stroke the Big Tree before dashing straight over their low pokes. Use that very same move to duck under their jump-ins and cross them up. Be disciplined with frame traps and condition them into staying still before going for hoverdash resets.

Playing around hoverdash's strengths and weaknesses is key to mastering I-No.

Mostly useful as a clutch anti-air due to not hitting crouching opponents. On regular and counter-hit AA, it's possible to follow up with a short combo, but generally the reset into pressure is preferred over the negligible damage.

A quick poke with decent range and not much recovery, though easily low profiled. Combos into 214K on standing opponents. Can be useful when trying to frame trap with 236S. Useful combo tool for midscreen juggles as it hits high and quickly.

Decent for pressure/combo fodder. Jump cancel means it's useful for baiting bursts. Decently damaging punish starter, though outshined by 2H, 6H, or j.S in many situations.

This move has a lot of range which allows for stuffing approaches or applying pressure at ranges that the opponent might not expect. Huge disjoint, but quite slow and is prone to being low profiled, though it can hit crouching opponents. Although it's technically 13f startup, the hitbox extends throughout the move's active frames and is quite short initially, only reaching a respectable range at 16f.

Slightly bigger than 2H on both axes, but worse in every other metric. Niche uses in combos in the corner or from further hits of 2S/f.S but otherwise rarely useful.

Average Dust. I-No's most damaging wallbreak attack when charged. Uncharged version can be useful with RC on deck for a quick overhead that can be cancelled into. The extremely high reward from the charged version makes it tempting to use, but even if cancelled into it's much worse as a mixup tool than hoverdash buttons.

Good 6P with decent range. Lack of jump cancel or grounded launch makes this move generally poor as a combo tool, except as a grounded CH starter. Still useful as an anti-air and counterpoke, despite generally not leading to much. Low profile is also useful to disrespect certain moves during pressure, like Sol's f.S, Giovanna's 236K, or Ky's 214K.

One of I-No's best combo and frame trap tools. Fast, easy to confirm due to its multiple hits, and launches high, letting it combo into 236H and delayed 214K anywhere on grounded hit. Almost any starter will combo into this move, but if they're too far away, it will whiff. Occasionally useful as a high-risk, high-reward anti-air using the second hit. Leads to great damage on CH in the corner, but not midscreen.

Not particularly useful as it's frame data is near-identical to 2K while having worse reward, gatlings, and range.

Good range for a 2K, I-No's main low to open up opponents. Tied with 2P as her fastest normal that can hit crouching opponents, making it useful as an abare tool as well. Gatlings into 6H at close range for a combo and 2D for a hard knockdown into Antidepressant Scale okizeme.

I-no performs a quick sweep with her guitar with some recovery. Critical to setting up okizeme, as it allows I-no to cover her approach with a meaty note. Hard to punish if spaced as it's only -7 on block, making it useful as a blockstring ender at times. Naturally frame traps from 2K and 5K, leading to a meterless wallbreak combo in the corner on counter hit.

Mainly used as an air to air. Whiffs on most crouching opponents, making it a poor choice as a mixup.

Due to it's low blockstun this can be useful to try and frame trap opponents or go for a tick throw. It's also I-No's only button that cancels into j.D, making it useful to start mixups. However, the opponent can throw you when you land, so if possible you want to space it or make the transition into the landing blockstring tight enough to beat their throw attempt.

One of your go-to moves after hoverdash. Sets up F-Shiki with double jump j.K or j.S, and is generally useful as combo fodder due to its jump cancel and j.H gatling.

Big guitar smack. Amazing air to air and useful after a longer hoverdash. Can be used after a short hoverdash to fake an overhead and go for 2K.

A mixup tool that alters momentum, used to add an extra overhead from your air blockstrings. Can also crossup. Occasionally useful as a combo tool as it launches the opponent straight up on air hit, has a dash cancel, and gatlings from j.K.

No longer a reversal like throws were in previous games, but still useful as an abare tool due to it being I-No's fastest attack. Does a decent chunk of damage, useful for opening up opponents too focused on I-No's high/low. If the tension is available, should always be PRC OS'd to be safe on whiff.

Causes hard knockdown, but usually puts you too far from the opponent with too little advantage to set up note oki. If you're close to the corner but not right up to it, however, the distance factor is negated, and you can set up notes as you like.

Long whiff animation means air throwing is weaker as an anti-air option than in previous games, but the range is also increased to compensate. Does a decent chunk of damage and I-No can usually get a meaty j.H after hitting it.

One of I-No's most notable moves. Notes can be shot in neutral to force your opponent to block or move a certain way. They can also be shot after a 2D or 236H knockdown for a safe mixup. Keep the long recovery and limited vertical control in mind when using this move in neutral, especially if you're more used to earlier versions of the character.

The projectile gains hits as it travels, to a maximum of five, leading to more blockstun/hitstun if it connects. By holding 2 or 8, I-No can influence the note's trajectory upward or downward.

Rather than how far it's travelled, the projectile's number of hits depends on how long it's been out. Due to this, character hurtboxes can determine how many hits note will have after travelling a certain distance.

Charts approximating hits at each distance for Ky and Potemkin

Strictly worse than grounded note in basically every situation. Don't use this move.

I-No's most essential pressure tool. Great low profile during startup means Stroke is extremely useful for approaches in neutral, but both versions can be prone to trading with attacks it low profiles, as the low profile ends as soon as the move becomes active. Both versions will lead to great damage on counter hit.

I-No's divekicks. If I-No presses the same button used to input the special after it connects, she will bounce up, allowing a pressure extension. Aware opponents can mash or use 6P to deal with it, but I-No can block after the follow-up to try and bait out buttons, though she gets no reward for it. However, even on block, using the follow-up makes the dive safer, especially for j.236H.

These versions are largely identical in function. Both are largely useless in combos, requiring RC or full charge to convert in the vast majority of situations. They do cause a soft knockdown, however, so they allow for a quick hoverdash reset. They are also useful to stall air momentum and catch careless anti-airs, or as air-to-airs to drag the opponent back to the ground with plus frames.

If the follow-up is used on a midscreen hit, you won't get any oki from hitting this. However, not using the follow-up allows I-no to get a meaty jump-in. Take note when using these moves to punish!

A projectile with good range, but easily low profiled by runs, crouching opponents, and even certain standing characters. Will even straightforwardly lose to midrange pokes that slightly shrink the users' hurtboxes such as Ramlethal's or Ky's 5H. Even with these cons, Chemical Love is still useful in neutral to stuff approaches using far moving specials and airdashes, curbing jumps from a distance, and simply as a poke. In addition, the move is vital to I-No's corner combos. Using it in the air will raise I-No further up.

Absurdly damaging command grab super that supplements I-No's great high/low mixup game. Active instantly after the superflash, so the opponent needs to be in air before it to avoid Megalomania, they can't simply react to the flash. The projectiles that come out after the cinematic will appear even on whiff and I-No is completely invulnerable until the end of the attack, making jumping forward the only way to punish this super. The projectiles inexplicably track behind I-No if the opponent is close enough to her back.

The projectiles that come out on whiff are unfortunately not fast or active enough to force the opponent to block, so this super isn't too great to chip the opponent out.

I-No's only reversal, in which she jumps with a flying knee strike, then emits a circular area-of-effect projectile around her while airborne. If done while already airborne, I-No skips the flying knee and simply does the projectile.

If the projectile is blocked by the opponent, I-No has enough advantage to run a mixup. This makes it useful if your initial mixup is blocked, or if your opponent isn't aware of how to punish this super. Will force an Area Shift in the corner, but won't actually break the wall unless the opponent is right up against it.

In many matchups, ending corner combos with Ultimate Fortissimo is critical as it allows I-No to continue her offense without returning to neutral.