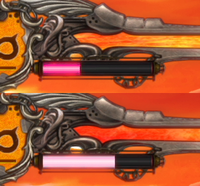 Chip damage ignores Guts scaling making them much more potent when the opponent is low on life! However, any chip damage that would KO a defender with 2 or more health will reduce their health to 1 instead. That means chip damage can only kill someone if they are exactly at 1 health! This also means that special attacks/overdrives that do multiple hits are much more effective at low life scenarios since they can bring a defender to 1 health and immediately deal the final point of chip damage!