Knowing how to use which block in which situation will improve your game immeasurably. Not only will you be able to defend better and survive longer, but in some cases you will be able to resume your offense faster. 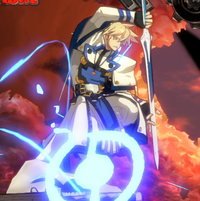 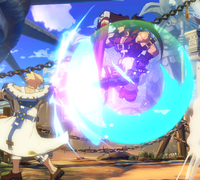 Use air FD against ground attacks

Basic air blocking is even easier; simply hold any backwards direction while airborne. Air blocking does not have high/low blocking, but instead comes with another restriction: basic air blocking will not work against ground based attacks.

Ground based attacks are all non-projectile attacks that are performed on the ground, such as all standing/crouching normals, ground specials, and ground supers.

Any time your opponent attempts to use a grounded anti-air attack, you will need to Faultless Defense instead of basic air block. Also remember that after you air block (any kind), your jump options are restored. This means that you can do something like double jump to block an aerial projectile then double jump again, or airdash afterwards, if you're not too close to ground. As with ground blocking, you also can't air block against air throws and unblockables.

One must start blocking right before the opponent's attack touches them within 8 frames before the hit connects. Your character will flash white and the word "JUST" will appear on screen if you IB an attack. If you mistime an instant block, you are unable to instant block again for 30 frames. This prevents mashing IB.

You can IB "during" attack patterns. This means that while normal blocking, you can begin IBing at any point if you can time your blocking with the opponent's attacks! Think of it as a mini-game: time your blocking to the rhythm of the opponent's hits. Keep in mind that you can indirectly increase your RISC slightly by IB blocking, so in some situations it can work against you.

Faultless Defense is an interesting and highly useful technique.

It's often used to negate guard damage, but it has other important uses. To perform Faultless Defense, hold any backward direction and press any two buttons except

Worth repeating is that using FD in the air allows you to air block attacks that are otherwise unblockable. Air FD is the primary way to air block things like an opponent's 6P or 2H. Another point worth stressing is that FD increases pushback while blocking. This allows a player to escape an opponent's offense sooner by pushing him out of attack range! An advanced strategy is to make the opponent's attack miss by pushing him away with FD, then counter attack while the opponent is still recovering from his whiffed attack. Just like with Instant Blocking, you still must block high/low attacks correctly when using Faultless Defense. Complete knowledge and mastery of Faultless Defense is critical to high level play. Always try to keep some Tension specifically for Faultless Defense.

Finally, some attacks are completely unblockable, meaning the only way to avoid getting hit is to move out of the way! For example, Slayers's Undertow (632146P) is unblockable, as is Potemkin's Heavenly Potemkin Buster (236236S). 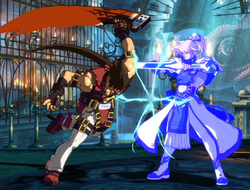 with 25% Tension to Blitz Shield while in a neutral state.

Blitz Shield places your character in a defensive state that will deflect the opponent's attack and stun the opponent giving you the opportunity to gain momentum!. Blitz Shield can also be performed while crouching (

Dead Angle Attacks are invincible attacks that knock the opponent away and cost 50% Tension Gauge.

To perform a Dead Angle Attack, press forward + any two buttons (except

for example) while in blockstun. DAAs are used to hit away an attacking opponent and reset the momentum of the match. It can also be used to do a small amount of damage. Each character's DAA is unique and as a result, some are stronger than others. When the opponent is low on life, DAAs themselves do no damage. Like most other attacks, DAAs have startup, so it's possible to bait an opponent's DAA with attacks that recovers quickly or by Jump Cancel > air block. It's best to use DAAs when you are certain it will connect or else the opponent will be able to severely punish you. As mentioned in the Tension Gain section, using a DAA will reduce the amount of Tension you gain by 80% for a full 4 seconds. 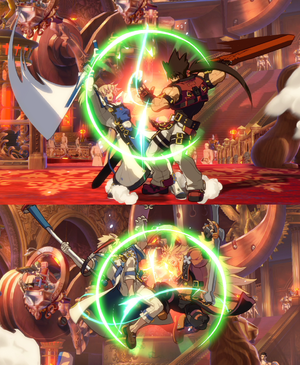 Bursts are an extremely expensive but highly versatile tool in Guilty Gear.

+ any other attack button. The character will rise into the air and an aura of energy will strike all around him. Bursts are strike invincible, but not throw invincible. Depending on a character's current state, the Burst will be either Blue or Gold.

Both types of bursts have their uses:

Reversals are the act of doing an action immediately after waking up or leaving blockstun.

A common example is Sol doing a reversal Volcanic Viper after getting knocked down. When performed correctly, the word "REVERSAL" will appear on the side of the screen, but this doesn't appear for all reversal actions.

2F Window: Backdash (only if second 4 is held)

1F Window: Gold Burst (after burstable knockdowns, or from blockstun)