Ky performs best at midrange with a variety of useful pokes at his disposal, but he has tools at every range. He uses his fast and long reaching f.S to tame opponents and threaten them with high damage counter hit combos, and rounds out his spacing game with 2S, 5H, 2K, and 2D. From well spaced pokes, experienced Ky players can cancel into Stun Dipper to secure knockdowns from afar. Frustrated opponents that jump at him will find themselves dealing with his above-the-knees invulnerable 6P and extremely long reaching 2H.

When Ky finds himself further away from the opponent he can use his Stun Edge projectiles to harass them, either covering his approach or playing keep away. Ky has access to "Grinders" (see Durandal Call below) which further augment his abilities. Using Grinders, Ky can create projectiles to strengthen his zoning game, okizeme, and combos.

After securing a knockdown, Ky can safely set up okizeme using Charged Stun Edge, then apply his strong pressure game by mixing in low attacks, frame traps, throws, and pressure resets with 6H and 6K.

To turn the tide, Ky can use his exceptional Stun Dipper to slide under pokes and projectiles and score knockdowns, utilize his overhead Greed Sever to attempt to catch the opponent slacking on defense, or spend Tension to use his fully invulnerable reversal, Ride The Lightning.

He is a character that can rapidly switch between keeping the opponent away and turning on the offensive. His diverese moveset has a tool for every situation, but lacks specialization. 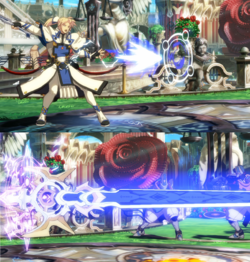