The merciless Backyard-born apocalypse from XRD SIGN has turned over a new leaf ever since she learned about hamburgers and puppies.

Ramlethal can fight with her two giant swords equipped or by setting them up to attack separately. Deployed swords can be used to control space in neutral, force opponents to block after a knockdown, or during blockstrings to keep opponents pinned down so Ramlethal can go for mixups. While her S and H normals are assigned to her swords for the sake of massive normals and setplay, her P and K normals work like attack strings seen in 3D fighters.

Ramlethal has decent ability to control her opponent in neutral (f.S, j.H, and an upward-arcing projectile), but setplay and okizeme are where she really shines: most any hit can confirm to a combo that will carry her opponent halfway across the screen. If she reaches the corner she can wallsplat her opponent and set up one or both swords for a multi-layer mixup - oh, and she has a command throw that launches, too. If her opponent somehow manages to block, Ramlethal can reset pressure with one of her plus on block overheads.

Balancing this offensive vortex are poor defensive options and very stubby non-sword normals. Ramlethal is notoriously limited without her swords, and detaching one them for a neutral gamble can leave her without any kind of poke for several seconds. Her ability to mash is also mediocre, and even her 2D sweep is prone to whiffing.

All in all, Ramlethal is a character who can take a lot of work to get going - but once she does, she can feel damn near impossible to stop.

Ramlethal can detach her swords and set them on the screen relative to her opponent's position. The swords will rest in the background wherever Ramlethal set them until she attempts to swing a sword. During the swing's startup and recovery, it becomes vulnerable, and will be knocked down for a short time if hit. When a sword is detached, Ramlethal loses the corresponding sword for her normals until she recalls it manually or uses her Marteli/Forpeli special moves.

5K seems similar to others character's 5Ks on the surface, but due to Ramlethal's nature, it fits more in-line with a normal from a 3-D fighter. She cant get too much reward off of it alone, such as a basic knockdown or being able to jump cancel it, but she has followup options that can be pretty rewarding both on block and hit. It cannot cancel into other normals, but is part of an overall combination of strings (see below). Use this move if you don't have equipped far slash and need a poke.

Swordless far slash doesn't see much use as its awful range prevents it from competing with more conventional far slashes/pokes. It is a poor neutral tool and is a huge reason as to why most players keep the S sword for superior pokes.

Ramlethal's f.S is almost essential to her neutral, so much so that many choose to keep an non-deployed f.S equipped at all times outside of her corner game. It doesn't have much reward non-counterhit, but it is still by far one of Ramlethal's better pokes. Use often.

6S does a horizontal slash. Has better active frames than 6H and always appears in front of them. Staggers on counterhit.

2S does a clockwise spin with the sword. Slow to start up but has a big hitbox and causes ground bounce on hit. Requires S sword to already be placed with 6S.

6H does a downward vertical slash with the H sword. Appears above opponents. Staggers on counterhit.

2H is similar to 2S but instead does a counter-clockwise spin. Difficult to avoid and also causes the most blockstun out of all the other sword attacks due to its attack level. Floats on hit. Requires H sword to already be placed with 6H. 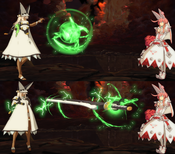 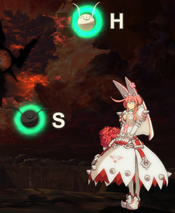 Using 6H or 6S causes one of the two familiars to do a tracking teleport to the opponent and attack once. The familiars will standby at the spot where they teleported initially until they are summoned again. She can cancel the majority of her normals into a summon as well as the second hit of combination attacks.

(Numbers in brackets for green Dauro)