This is an update to Guilty Gear XX that adds Robo-Ky as a playable character. Kliff and Justice were also added in the console release of the game, though they are not considered tournament legal. 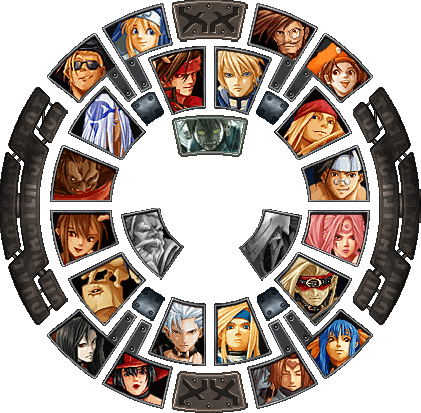 There are 2 arcade versions of this game. The first was criticized for its bugs, resulting in Arc System Works to create a second version. Players can tell the difference by looking at the logo: the first version has the word "#Reload" in red, while the second version has it in blue.

The Korean release of the game includes a Korean dub as well as having a completely new soundtrack composed by Shin Hae Chul.

Tier lists are made to give a general idea of the character strength. They do not decide the strength of the character, and do not decide who can or will win a given match. Tier lists help act as a basic point to understand which characters have more matchups in which they are advantaged against another character piloted by another theoretically equally skilled player.

Note that the beginner tier list ranks characters among the tiers going from left (easiest) to right (hardest). Keep in mind that this list represents the characters' effectiveness at a beginner level and is not representative of the overall skill curve of each character! Some examples:

Keep in mind that this list is only a visual indicator for a beginner to glean over; character love can be an extremely strong motivator that will let you surpass all kinds of technical requirements so be sure to pick whomever you like the most, don't let this list decide for you!