When picking a character at the character select screen, players can choose between Normal Type and Shadow Type versions of most characters. This is similar to the Groove System in Capcom vs. SNK 2.

Each version plays slightly differently and has access to unique mechanics:

The implications of these changes drastically change how players approach these characters. For example, Normal characters instantly become more threatening once they reach Awakening: they gain access Awakening Supers as well as 50 SP to use them, as well as Awakening's defensive bonus. Shadow characters must decide between conserving SP to unleash Shadow Frenzy at an opportune time or using their SP for Awakening Supers, Guard Cancel Attacks, etc.

Consider each version carefully when selecting a character -- you can't switch types until the match is over!

The SP Gauge normally versus when in Awakening. Only applies to Normal Type characters!

The SP Gauge starts each round at 0 and has a max of 100. SP grows over the course of the match through attacking, defending, and other actions. If a character enters Awakening, then the max becomes 150, and the character automatically gains 50 SP.

The SP gauge resets to 0 and Awakening is removed at the beginning of each round, so it is a good idea to use all available SP each round.

Gaining SP is pretty simple: do just about anything! Attacking, blocking, and even getting hit all give you SP. You can also completely fill your SP gauge by hitting the opponent with a Max Burst.

The amount of SP gained per hit in a combo scales with the combo. The exact details about this scaling are currently unknown, though attempts at determining the formula have been made.

After performing attacks that consume SP (such as Skill Boosts, One More! Cancels, Guard Cancel Attacks, and Instant Kills), the amount of SP you gain from standard actions will drop significantly for a limited amount of time (speculated to be 90% reduction for 180 frames), similar to systems found in BlazBlue and Guilty Gear.

Combos that are started during this time will suffer reduced SP gain throughout the entire combo, even if it lasts beyond the cooldown window.

An exception to this is Shadow Labrys's Titanomachia super: for the duration of Titanomachia, she will be restricted from gaining SP normally.

Getting the first hit in a round gives a bonus 10 SP to the attacker in addition to the normal SP gain of the attack. If both players trade for the first attack, then both players get the bonus! If a throw is teched, the player who initiates the throw will receive the meter bonus -- initiating a throw counts as a hit, even if the throw is broken by the opponent. Consequently, it's common to see throws at the start of the round, particularly from Shadow-type characters!

Skill boost attacks are similar to EX attacks in games like Street Fighter 4. These attacks cost 25 SP and enhance a character's special attacks by giving them new properties, such as increased damage, reduced recovery, new attack angles, or something entirely unique.

When performing a Skill Boost, the character will briefly flash blue and a blue silhouette will trail him/her until the move ends, hits the opponent (if the special is a grab), or is interrupted.

Narukami performing one of his supers. The characters are frozen in place briefly.

SP Skill Attacks (commonly known as super attacks) cost 50 SP and are giant, flashy attacks. They usually do lots of damage or have other interesting properties such as invincibility.

Supers are great for use as combo enders thanks to a property called Minimum Damage.

The character will flash blue during startup, as with SB Skills. 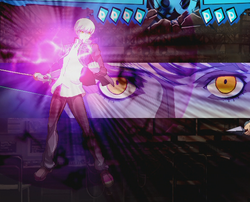 Shadow Frenzy is a mechanic exclusive to Shadow Type characters that allows for fancy combos. Press A+C+D with a full Burst Gauge to activate Shadow Frenzy. The SP Gauge turns into a purple timer with time equal to the amount of SP you currently have. Shadow Frenzy ends when the time reaches 0. During Shadow Frenzy:

You can cancel into Shadow Frenzy off of most attacks, similar to using One More! Cancels or Bursts, and can easily confirm most hits into damaging combos.

When Shadow Frenzy is cancelled into, the start-up is very fast and consumes the entire Burst Gauge, but if performed at neutral, the start-up is slightly slower (unverified) and consumes only 75% Burst. Both versions are fully invincible until the animation ends. Visually, Shadow Frenzy's activation is similar to a One More! Burst, with the Shadow character posing as if Bursting and shouting a unique line.

Press 6+A+B while blocking to perform an attack with guard point against all attacks and throws that blows the opponent away on hit. Guard Cancel attacks cost 50 SP and can help a player who is in a defensive position reverse the momentum of a match. All Guard Cancel Attacks can be One More! Cancelled and One More! Bursted to avoid their lengthy recovery time.

Combos that start with a Guard Cancel Attack cannot kill the opponent regardless of how much damage they deal. The opponent will always survive with at least 1 HP. This applies even to instant kill supers such as Naoto's Hamaon!

It even works with projectiles!

One More! Cancels are analogous to Roman Cancels in Guilty Gear or Rapid Cancels in BlazBlue and cost 50 SP. Press A + B + C after your attack either hits or is blocked by the opponent to cancel the recovery of the attack and immediately return to a neutral state.
One More! Cancels can be used to extend combos, cancel the recovery of long attacks to make them safe from counter attack, or to reset block strings in order to continue attacking the opponent. Note that if you whiff an attack (the attack does not touch the opponent at all), then you cannot perform a One More! Cancel.

Instant Kill attacks are aptly named: they instantly defeat your opponent! Press 222+C+D to perform your Instant Kill (Shadow Labrys instead uses 222+A+B). Each character's Instant Kill is unique and has very different properties, but most have lots of startup invincibility.
The character portrait will flash white when an Instant Kill is available. There are a few specific conditions that must be met in order to be able to perform an Instant Kill:

Visually, you will notice that the background is different compared to supers and Instant Kills cause the HUD to disappear when they connect.

Instant Kills are not comboable (you cannot combo into an Instant Kill), are almost always blockable attacks (if unblockable, then they are easy to avoid by jumping, hopping, or another form of movement), and significantly disadvantageous if blocked or whiffed. While cinematic spectacles, Instant Kills are seldom practical save for their lengthy invincibility or for punishing very, very slow supers.

The card shaped symbols below each character's life gauge represents each persona's life. A card is lost each time the character OR his persona is hit (including by zero damage attacks such as Bursts and escaped grabs) when the persona is visible.

If all cards are lost, then the character enters Persona Break. While in Persona Break, attacks that require a Persona, such as C and D attacks, some Specials and Supers, and Bursts are all disabled.

During Persona Break, the Persona Gauge will slowly refill over time. The more cards a character has, the more time Persona Break will last! The basic formula is:

Bursts are a special type of invincible attack available only to Normal characters that are performed by pressing A+C+D while the Burst Gauge is full. When Bursts are unavailable, a black "B" will be shown instead. This "B" will slowly fill up over time and as you get hit. Once it's full, you can Burst again. The status of the Burst Gauge carries over between rounds, meaning if you Burst at the end of a round, the Burst Gauge will be empty at the start of the next round, and you must wait until it refills to perform another Burst. Consequently, Bursts are a precious resource and the risks of using one must be considered carefully, or else you may not have it when you need it next round!

An empty Burst Gauge takes 90 seconds to refill if you don't do anything. It is very unlikely that you will have to wait that long, as the following help refill it:

Bursts in Persona 4 Arena have different properties depending on which type of Burst is performed.

Full SP if it hits! Refills Persona Cards too!

Pressing A+C+D while in a neutral state (meaning not attacking, blocking, or being hit) will perform a Max Burst (also known as a Gold Burst). If the opponent is hit by a Max Burst, then the opponent will be blown back and your SP and Persona Gauge will fill to max. The Burst Gauge will also automatically start from 25% full instead of completely empty.

You can not combo into or from a Max Burst:

Press A+C+D while blocking or getting hit to perform a Defensive Burst (commonly referred to as Blue/Green Burst) that blows the opponent away on hit and deals no damage. Defensive Bursts are used to interrupt your opponent's combo or pressure and allows you to prevent damage or reset the momentum of a match. Performing a Defensive Burst completely empties the Burst Gauge.

Defensive Bursts can be Disabled

There are times when Defensive Bursts are disabled, even if your Burst Gauge is full:

The Burst Gauge will be crossed out during these conditions.

Make deadly combos or cancel your attack to make it safe.

One More! Bursts have the following properties: