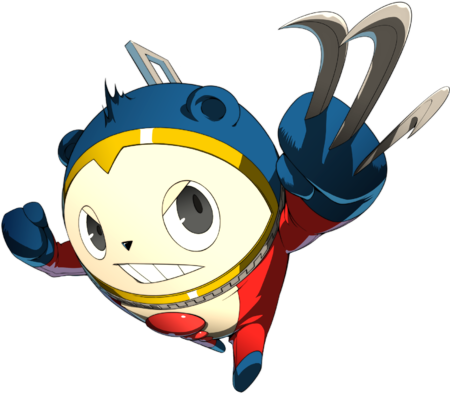 Teddie is a mysterious stuffed-bear-like creature found by the team in the TV World in Persona 4. Teddie is a prankster who likes to play practical jokes and use bear-related puns. Teddie's inner struggle is that he is meaningless and that his existence is "hollow"; he is able to overcome his fears with the help of the team. In Persona 4: Arena, Teddie fights with his claws, items, and his Persona is Kintoki-Douji.


Health
9500
Strengths
Teddie has a lot of good normals which can be very annoying for your opponent to deal with. He can also transition between zoning and rush down very easily. j.A and j.B are very strong jump ins. j.C is a good air to air. His 2B is also a strong anti-air. 5B covers a lot of distance on the ground and is very annoying for some characters to deal with. He has high corner damage which often ends with the opponent knocked down and either in Fear or Rage state. Using various items, he can also set up offensive traps and unblockables. Items are also very handy in Teddie's neutral game. Teddie's Furious Action is also very strong as not only is the attack unblockable, but it's completely unpunishable once activated.
Weaknesses
His gameplan can be somewhat complicated as it's dependent on what item is out. He is very dependent on his Persona as he needs it not only to throw items but also to do his higher damaging combos. Teddie's moves have long recovery time on whiff so if they whiff, expect to be punished. His All Out Attack is his only overhead, so he has a pretty much non-existent high low mix up game. He also does not do much damage midscreen outside of 2C fatal and often relies on meter to put the opponent in the corner.
Movement Options
1 Double Jump/Airdash, Run-type Dash
Play-style
Teddie's playstyle is very flexible. He can either zone with long reaching normals and items, or he can play a more rush down oriented game using his good jump in normals to create really ambiguous cross up situations. As a Teddie player, you will often go back and forth between the two styles depending on the match up and be generally annoying for your opponent to deal with. In certain combos he is also able to inflict status effects like Fear and Rage which are very dangerous as they lead into Fatal Counters and unblockables.
Item Throwing
Press D to have your Persona throw an item. Items are thrown in the following order:
MF-06S Brahman > Dr. Salt NEO > Dry Ice > Smart Bomb > Oil Drum > Vanish Ball > Firecracker > Lightning Ball > Muscle Drink > Pinwheel > Heavy Armor-Agni > Mystery Food X > Amagiya Bucket

Note- For combos ending with j.B, it is optional to j.D right after for oki. It is important to pay attention to which item you have as throwing the wrong item can actually be detrimental.

~Only works on air hit CH