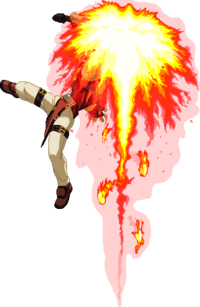 Common examples of this include Sol's Volcanic Viper and Ragna's Inferno Divider.

While these are the most famous type of reversal, most characters often have a reversal option such as an invincible super attack, or the game may have built in universal reversal options like backdashes with startup invincibility.

Practice. There's not much else to it, though most modern games have input buffers for attacks that make reversal timing slightly easier for players.

For players having trouble doing reversals, go into training mode and:

Reversal can also refer to moves without invincibility done immediately after waking up or after exiting blockstun. Common examples of this include a reversal 5P/5A/5L, or a reversal throw in Guilty Gear XX Accent Core Plus R.