There are a few common tournament bracket formats, we will briefly go over them here.

Single Elimination is a simple format where once a player loses, they are eliminated from the tournament. This format is popular for team competitions and informal tournaments since it is very fast to run, the total number of matches player is equal to the number of players - 1.

The basic flow is:

Double Elimination is a format where a player must lose twice to get eliminated from the tournament. This is a popular format for 1v1 competitions because it determines the top 4 without having any tiebreaker rounds, and everyone has a second chance to play more tournament matches. The downside is it almost doubles the number of matches needed compared to Single Elimination, and delays are common because matches need to wait for other matches to complete. 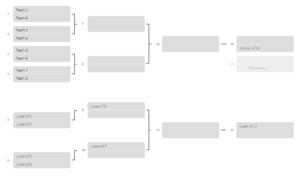 There are two brackets: Winners Bracket (top) and Losers Bracket (bottom). One loss puts you in losers, another loss eliminates you.

The basic flow is:

For larger tournaments (like most majors), it makes sense to split the players up into groups of players called pools. Each pool works like a smaller double elimination bracket, except instead of playing until a winner is decided, the top X players advance to the next stage. The number of players that advance depends on the tournament and can vary from 1 to 4 players.

Pools are used so more matches can be played concurrently, as there will be less bottlenecks in later rounds of the tournament, and players that advance out of pools can know when their next match will be played instead of waiting for unknown amounts of time for brackets to catch up to them.

The number of player slots in a Single or Double Elimination tournaments needs to be a power of 2 (ex: 8, 16, 32, 64, etc.) in order to function fairly. Obviously that doesn't mean you need that exact number of players to run single/double elimination tournaments; the slots remaining are filled with empty spots called Byes and are spread evenly over the entire bracket.

Seeding is the act of deciding player's starting positions in a bracket/pool. There are two common types of seeding - Skill and Regional. Both factors are considered when seeding brackets.

Skill Seeding
The goal here is to spread the higher skilled players (as decided by the Tournament Organizers or some ranking system) as far apart in the bracket as possible. This serves two purposes:

The Swiss System is a twist on Round Robin that tries to match players that have the same score every round.