Difference between revisions of "GGST/Damage"

Characters fall at different rates when being hit in the air. In general, the heavier they are the faster they fall. Each character's weight class is listed on their page.

When being attacked, characters usually get pushed in the opposite direction.

Pushback Increase
Pushback of attacks gradually gets harder as the combo time goes, even the moves are exactly the same.
Pushback increases in both grounded combos and juggle combos, but the grounded one suffers this effect much more. This means to further extend a combo, it's quite necessary to launch the opponent into the air first.

Counter Hits can also alter the properties of moves on hit, enabling follow-ups that are not normally possible.

Guilty Gear -Strive-'s premier mechanic is the wall. As the opponent takes damage in the corner, the wall will slowly crack. When the wall is one hit away from shattering, the game will freeze, the opponent will stick against the wall, and any hit will break the wall. Breaking the wall will transition the stage and give the attacker Positive Bonus. 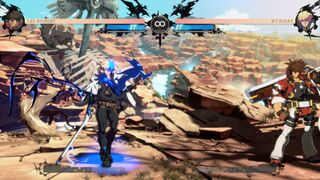 Everything to the right of Ky here is near the wall. Total wall damage is capped to 50% when the opponent is not located near either wall.

Counterintuitively, wall damage is tied to each character rather than the walls themselves. Characters still receive "wall damage" even when they are not near a wall. Players familiar with other fighting games can think of it like an invisible stun mechanic.

Wall damage continues to rise at a rate of 5 per frame until the combo ends. (e.g. The opponent recovers from hitstun or lands flat on the floor.)

When a player is not being hit, wall damage is recovered at a rate of 10 per frame.

The current amount of wall damage can be discerned to some extent by the size of the crack in the wall.

Note that against a grounded opponent, the wall damage dealt by an attack is not actually counted until you hit the opponent again.

Wall Break
Regardless of the kind of Wall Break, the defender takes 50 base damage, both characters end up mid-screen and the attacker gains Positive Bonus.
This damage is not affected by R.I.S.C. Level or proration, but is affected by defense modifiers and Guts.

Normal Wall Break
Breaking the wall with a normal or special attack results with both players recovering from the Wall Break at the same time.
It's functionally the same as a round start, so characters with good round start options will generally be stronger.

Overdrive Wall Break
Most Overdrives will break the wall regardless of wall damage.
Breaking the wall with an Overdrive knocks the opponent down after the Wall Break rather than resetting both players to a neutral state.
The knockdown is about +36, giving the attacker plenty of time to continue their offensive.

There are 3 standard factors when assigning damage: Defense Modifier, Guts Rating and R.I.S.C. Level, as well as 2 non-standard factors assigned on a move-by-move basis: Proration and Off The Ground. When combined, they determine how much damage your character will take at every point in the Life Gauge. It's important to learn how strong/weak/effective your attacks will be at different points of the battle.

A positive R.I.S.C. Level is denoted by the pink bar filling the gauge. If it fills completely, the bar turns red and a flashing warning sign appears next to the gauge.

The R.I.S.C. Level Gauge is located directly underneath your character's Life Gauge and it directly affects damage scaling.

Please note that in this game, multi-hit attacks only lower R.I.S.C. Level once and any damage scaling caused by R.I.S.C. Level reduction from the hit in question does not apply to subsequent hits of the same attack. This is another factor that contributes to the game's generally high damage.

When Full (Red w/Flashing Warning Sign)
R.I.S.C. Level damage scaling does not come into effect, and the next hit is a guaranteed Counter Hit.
If the hit is a strike, it becomes a strong Counter Hit unless the strike locks the opponent's position or leads into a special cinematic state on hit.
R.I.S.C. Counter Hits deal 10% additional damage in addition to the standard 10% damage increase of all Counter Hits.

Proration is still applied in combos regardless of R.I.S.C. Level. The R.I.S.C. Level slowly empties while the character is in a neutral state.

Proration is a percentage-based damage modifier applied to certain attacks independently of other forms of damage scaling in order to reduce the damage of certain combos for the sake of game balance. Proration comes in two varieties: Initial proration and forced proration.

Initial Proration
Factored in only when the first attack of a combo is done with an attack with this property, prorating all subsequent attacks in the combo.
Generally applied to quick attacks that are common as pressure or mix-up (particularly lows), as a way to balance their speed and keep damage reasonable in situations where the opponent's R.I.S.C. Level is likely elevated.

Forced Proration
A more harsh version of initial proration, prorating all subsequent attacks in a combo no matter what. For example, all normal throws have forced proration.

Proration does not stack, as lower percentages overwrite higher percentages. An exception to this is the forced proration caused by certain types of Roman Cancel slowdown, which apply separately to other forms of proration temporarily.

Roman Cancel Proration
The slowdown induced by Red and Purple Roman Cancels applies 80% forced proration temporarily. This works independently from R.I.S.C. Level damage scaling and other forms of proration, and damage from attacks once the slowdown has ended will deal damage as normal. Canceling the Roman Cancel to prevent slowdown or waiting out the slowdown are possible ways to avoid this damage reduction.

Attacks that hit an opponent during hard knockdown are considered Off The Ground (OTG), dealing a percentage of their regular damage determined on a move-by-move basis. Most attacks deal 80% damage OTG, but some will deal either 60% or 100%. Attacks that deal 100% damage OTG are typically attacks that swing downward, towards the ground.

Note that unlike other forms of damage reduction, this modifier only applies to the hit in question, subsequent hits use their own modifier even if the percentage is higher.

Overdrives deal a minimum of 20% of their base damage. This damage is not affected by R.I.S.C. Level or proration, but is affected by defense modifiers and Guts.

Guts acts as a type of damage scaling that gets more intense the lower a character's life. For example, an attack that would do 100 damage to Sol at full life would only do 50 damage when he is at less than 10% life.

This means that the Life Gauge is misleading; a Life Gauge that visually looks like it's 50% full actually has much more than 50% life left.

Each character has a Guts Rating. As you can see, the lower the Guts Rating, the less damage scaling a character will receive at lower life values.

Guilty Gear has character-specific defense and Guts. The chart below shows each character's defense modifier and Guts Rating.

Effective Health measures the raw amount of damage a character can take, taking Guts and the defense modifier into account. Values are rounded to the nearest whole number.

Chip Damage
When special moves and Overdrives are blocked, they deal a percent of their base damage as chip damage to the opponent.

For most specials and Overdrives, the chip damage they deal on block is 25% of the attack's base damage, but some attacks do unique amounts of chip damage. For example Sol's Fafnir does 50%. Nagoriyuki's normals that reduce the Blood Gauge on block also deal a small amount of chip damage.

Any chip damage that would K.O. a defender with 2 or more life will reduce their life to 1 instead. That means chip damage can only kill someone if they are exactly at 1 life. This also means that special moves and Overdrives that do multiple hits are much more effective at low life scenarios since they can bring a defender to 1 life and immediately deal the fatal hit of chip damage.

Wall Break Damage
When breaking the wall, the defender takes 50 base damage.

This damage is not affected by R.I.S.C. Level or proration, but is affected by defense modifiers and Guts.

Life Drain
Nagoriyuki's life drain during Bloodrage is unaffected by Guts. It also can not K.O. himself. 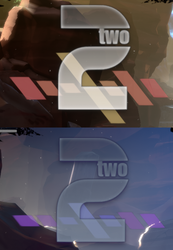 Top means it was a combo. Bottom means you could have blocked.

During the last few frames of a floating crumple or the entire duration of a Guard Crush, players are stuck in a state where the only actions they can do is block or not block. Getting hit during this time results in an invalid combo.

During a stagger, players can time a button press to be able to block. If players are hit by an attack that connects during the window they could've blocked in after a successful stagger recovery, the HUD will show an invalid combo.